LET MOMMY BE YOUR FIRST by Laura Lovecraft 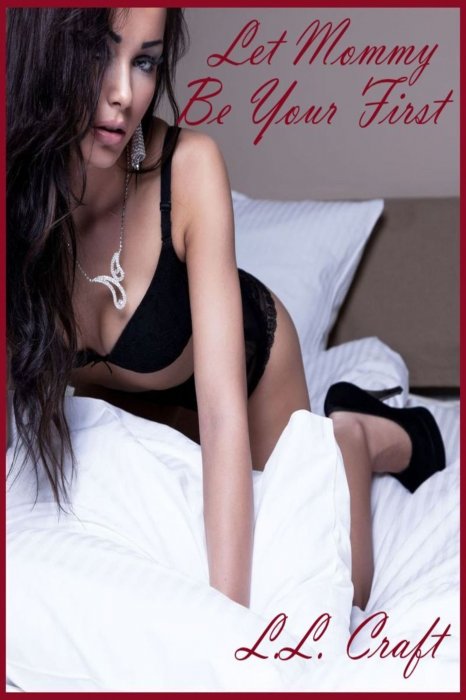 This is a short story, 48 pages, and it's narrated by our protagonist, Brian. He's 18 years old and, as the story begins, he is one day away from celebrating his one-year anniversary with his pretty young girlfriend Courtney. Both Brian and Courtney are virgins but plan to have sex for the first time with each other the next night. Brian is, of course, ecstatic.

This is all taking place at some kind of fancy Inn at some vacation spot near the beach that Brian and his parents are staying at, along with Courtney and her parents. We learn that Brian has always been particularly close with his mother, Crystal. They talk about everything, she is aware that Brian is still a virgin and planning to have sex with Courtney, and it was her that talked Courtney's parents into joining their family on this vacation and she planned to go out to dinner with John, Brian's dad, on that night so that Brian and Courtney could have the place to themselves.

By contrast, Brian's not as close to his father, who is a bit of an old-fashioned misogynist. While Crystal taught Brian to be respectful to girls and encouraged him to wait for the right one, John thinks Brian should be out getting laid as much as possible. And in recent months John and Crystal have been fighting a lot, as  Crystal feel neglected since John rarely has sex with her anymore, and he often mocks her for trying to dress sexy, telling her she's too old for that (no ages are given, but they're both said to be "middle-aged"), although Brian notes that he's mother is still very sexy, with long black hair and a voluptuous body.

So this sets the stage for what's to happen, as it establishes that both Brian and his mother are sexually frustrated, for different reasons, and that there was a lingering sexual attraction that Brian felt for his mother, which he figures he'll get over once he finally starts having sex with Courtney. But things don't go as either of them planned.

On the next night, John and Crystal get into a fight, and instead of going out to dinner together John storms out on his own. And Courtney calls Brian and tells her that she's changed her mind, she isn't ready to have sex yet, and cancels their plans. So now Brian and Crystal are alone together, and Brian is shocked when his mother comes on to him, offering to take his virginity herself.

What follows is multiple pages of passion, as mother and son engage in oral sex, titty fucking, missionary and cowgirl until Brian shoots his load deep inside his own mother's pussy. All the while the two tell each other how much they love and care about each other. And when the night is over more secrets are revealed and it's clear that this is not the end.