MOM GETS ME FIRST by Laura Lovecraft 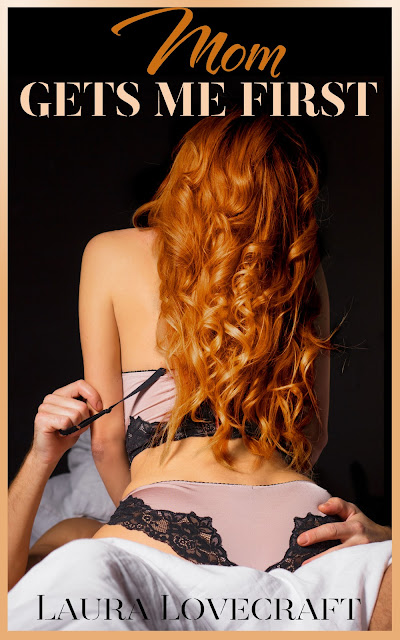 So click away now, if that sort of thing offends you.
This is the story of Ron, who's just turned 18. It turns out that years ago his father made a deal with him, telling Ron that if Ron abstained from sex until he turned 18 then he would give him a brand new car and some other mysterious surprise. He claimed that this was part of some kind of family tradition that he himself went through when he turned 18. Ron agrees to this, even though for the past 8 months he's been dating a smokin' hot sexually experienced girl named Christine who badly wants to fuck him. But Christine agreed to go along with Ron's desire to wait until he was 18. And so all they've done to this point has been some dry-humping until they each cum in their underwear.

The story opens on his birthday with Ron at Christine's house, they're in her bedroom and she's in some sexy lingerie ready to fuck. But just as she's bending down in front of him preparing to pull his pants down and suck his cock, Ron's stops her because he hasn't had the chance to talk to his father yet.

I have to admit, right from the start, this story was stretching all credibility, because the scene was hot and it's hard to imagine any 18-year-old male, especially one who was still a virgin, turning this down. But he does, to Christine's frustration, but he promises here that he's rented a hotel room for the two of them to spend the weekend in, so they have finally have all the sex they want. So she agrees to wait one more day for him.

Back at home Ron gets his car, and then that evening he has the talk with his father. His father explains that this family tradition is for the son to lose his virginity to his own mother on his 18th birthday. He said his own mother when he was 18, that it's the mother's job to teach her son how to make love to a woman. They just did it that one night and then never spoke of it again, and now it'r Ron's turn to do the same.

Ron is, of course, utterly shocked and a whole chapter is spent of him first refusing to even believe it. But, eventually, Ron goes to his bedroom where he's beautiful mother (describes as having long red hair and big titles) is waiting for him...

This is a hot story, once again propelled by Lovecraft's vivid descriptions. If you're into taboo tales, take a look at this one. It'll knock your socks off!