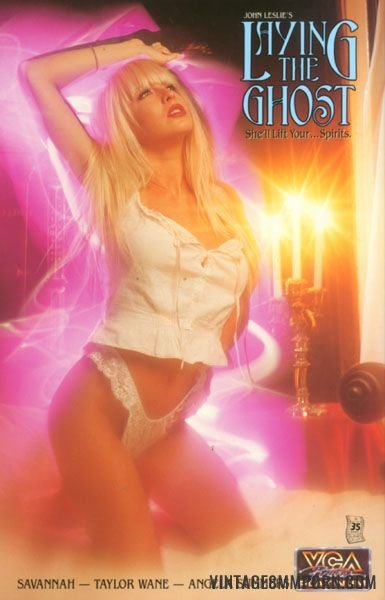 Written by Philip O'Connell and directed by John Leslie, and released by VCA Pictures, Laying The Ghost stars Joey Silvera and Taylor Wane as married couple Stanley and Kate. A month earlier they just moved into a new house that Kate inherited from her Uncle Ambrose, whom she never even knew. Savannah is Kate's younger sister Mandy, who moved in with them. The film opens with Stanley and Kate asleep in bed. Peter North appears as a ghost. He's buck-naked and with a hardon and he appears in the hallway then walks through the bedroom wall and awakens Kate and they begin having sex.

Both Stanley and Kate, who claims that she thought she was dreaming, react in shock, awakening Mandy who wants to know what's going on and they tell her. Kate immediately assumes it was a ghost, but Stanley isn't sure what's going on. Both he and Mandy want to leave but Kate refuses to give up her inheritance. Stanley grabs a bat and goes searching the house.

Tom Byron plays Andrew, Dr. Rhode's assistant. They agree to go to the house the next day to help get rid of the ghosts. Back at the house, while getting ready, Stanley and Kate have sex.

When Dr. Rhodes and Andrew arrive, they tell them they know the story of the house. Peter North's character was Captain Jonathan Parker, one day over 200 years ago he and his brother crashed on the coast and were shipwrecked and then were killed by "Indians" right on the spot where the house was eventually built. Apparently ever since then they've been haunting the house, specifically looking for a woman to join them. Many women over the years have made claims of being seduced by ghosts un that house but were always dismissed as either being crazy or being witches. Dr. Rhodes asks Kate to take her to where she encountered Captain Parker's ghost and they go to the bedroom. Meanwhile Mandy takes Andrew on a tour of the house, which ends up in her bedroom.

The film cuts ahead to an undetermined period in the future where Mandy and Andrew have just returned from their honeymoon, as the two couples now prepare to live happily ever after in the house.

Taylor Wane is one of my all-time favorites, and this was early in her career too, but she keeps either her shirt or a bra on in each of her scenes. That's a shame. Also, inexplicably, the film includes a laugh track during some of the sex scenes. It's distracting and adds nothing good to the film. I may have liked this more in 91, when I was a teenager and just seeing naked women on screen was enough to get me off, but as a more discerning middle-aged man, this doesn't rise to my standards.