AND NANNY AT NIGHT by Nick Eastwood 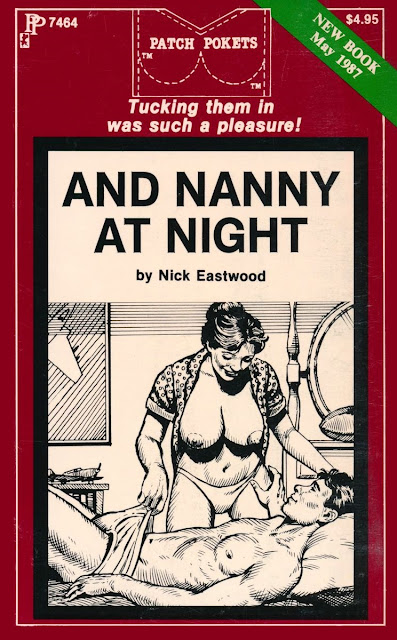 Originally published in May 1987 by Patch Pokets publishing, this 65-page story features Linda Lane, we don't get her age here but she's a college student. Described as being petite with dark hair and "firm high-riding tits" (which are also later described as "orange-sized"). She also has a high libido and is used to frequent casual sex with multiple lovers.

Linda has been hired by Jack and Betty Green, a rich married couple in their late 30's, to live with them for the summer and watch their son Kent who is home all day while they're at work. Linda initially hates the job because it's boring and doesn't give her any opportunities to go out and get laid, but it pays well and she needs the job to pay for college. Plus, it's pretty easy, because Kent is actually a teenager. We don't get his age either, just that he's a high school student. Too old to need a nanny, as Linda notes, but since the Greens are paying her to watch him she doesn't question their decision.

Kent, described as "just a little taller than Linda, lean and good-looking, except that he had a nerdy haircut and wore horn-rimmed glasses," is a super-introverted boy who spends most of his day in his room studying with a stack of books. So Linda's job mainly consists of doing some light cleaning around the house and having meals ready. Most of the rest of the time she spends sunbathing in a bikini by the Green's pool in the back.

So, let's be clear, yes, this story involves an adult woman having sex with a teenage boy, that's technically statutory rape, so if that idea offends you I guess this book is not for you.

Despite only taking a few days in total, it still seems like a lot longer than it would realistically take for Linda to succeed. She herself is shocked, as she knows that most teenage boys would jump at the chance if they had a pretty young woman coming on to them. But Kent is written as extreme in his shyness.

The day after the first incident, she forces Kent to come out of his room and do his studying outside by the pool. She then strips naked and starts swimming, asking Kent to join her but he refuses. Then she lays naked on a towel next time to "sunbathe", all the while Kent is struggling not to look at her. She eventually pulls him on the ground next to her, then gets on top of him and starts french-kissing him. This leads to her pulling down his pants and underwear and jacking him off while putting his hands on her bare breasts until he cums. But afterward, Kent just grabs his clothes and rushes back to his room, telling Linda that that was "disgusting."

The next afternoon while sunbathing again, Kent approaches her, saying that he still doesn't care about girls, but maybe it would be helpful for him to learn a few things and asks Linda to show him. Linda quickly takes the bait and strips the boy, then has him take her bikini off of her, and then has him fondle her breasts again and then lick them. Then she shows him how to use his fingers to play with her pussy and get her off, while she grabs his cock and jacks him off again. After they both cum, Kent immediately leaves again, saying he'd rather get back to his books and study.

The two spend the whole rest of the dang banging each other, by the time the Greens come home Kent is taking a nap, and Jack and Betty compliment the job Linda is doing in watching their son.

The next day, now that the floodgates are open, Linda and Kent rush into each other's arms as soon as his parents leave for work that morning. And they proceed to fuck right on the living room floor. But unbeknownst to them, Jack comes back, having left some paperwork behind that he needs for work. Linda and Kent are too busy fucking to hear him come in the back and he's shocked when he passes the living room and sees them. But Jack can't help but be turned on as he watches, so he doesn't do anything. And when they finish and decide to go upstairs to continue, he gets the papers he needed from his home office and then sneaks back out.

Later that night, when his wife and Kent are apparently asleep, Jack goes to Linda's room, where she's in bed in a nightie, reading. He tells her what he saw, and she assumes he's going to fire her, but just asks her to explain why she did what she did. She tells him the truth about being lonely and horny and how she just wanted to help Kent learn how to talk to girls. She then offers to show him what she's done with Kent and this leads to her taking off her top, showing him her breasts and kissing him, then getting him out of his clothes, taking off her panties so he can eat her out, and then he fucks her, which they both love. Linda loves it as this is the first "man-sized" cock she's had all Summer and Jack loves it because after 20 years of being married to his wife this is the first new pussy he's had.

The next day is Saturday, when Betty leaves in the morning to go spend the day visiting her mother. Jack gives Kent some money and tells him to go to the movies so that he can be alone with Linda (not that he tells Kent that's the reason, of course). After Kent reluctantly leaves, Jack and Linda go to her room to fuck. But Kent comes back early, after seeing some kids from his school who start picking on him at the theater. His plan was just to sneak back to his room and pretend to come back from the movies later, although he was also hoping that maybe his dad would go somewhere so that he could be alone with Linda. Naturally, Kent is shocked, angry, and jealous when he hears the noises coming from Linda's room and peaks in to see his father fucking her.

In their bedroom, Betty "punishes" Jack by giving him a blowjob, and then enticing him to fuck her. Like Jack, she realizes that after 20 years together their sex life had gotten a little stale (although they're said to be happily married, it's noted that they hadn't had sex in 3 weeks before this day), and this kinky little incident has sparked the desire in both of them. After they've finished fucking, Betty tells him she doesn't mind if he wants to keep fucking Linda for the rest of the summer, as long as he promises to "leave a little" for her. THE END.

These little paperbacks (published through various divisions of a company called Greeleaf Classics) were fun for me to read, back when I was too young to have regular access to porn videos or magazines. Nick Eastwood was one of my favorite authors of the genre, and after re-reading this book now I can remember why. As flimsy as the premise may be, starting with the idea of a teenage boy having a "nanny" in the first place (it would have at least made more sense if she was just a maid, which is what she was for all intents and purposes), and that boy resisting her advances for as long as he did, it is nevertheless an arousing tale, as Eastwood vividly describes the action during the sex scenes, making it easy enough for the reader to put themselves in the shoes of whichever character they identify with.

The only funny thing is how Jack and Betty are portrayed as being "old." Again, they're just said to be in their late-30's, but when he's first fucking Linda Jack jokes about being an old man, and her giving him a heart attack. And he's surprised when he's able to get another erection so soon after cumming, which he attributes to Linda's sex appeal. Betty also has similar thoughts, attributing her stale sex life with Jack to them getting older. This all seemed logical when I was reading this as a teenager, but now that I'm past my 30's myself, that doesn't seem so old!