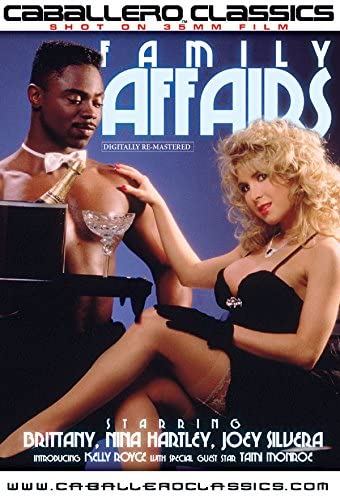 Nina Hartley is Mary Randall, married to her husband Hank (Mike Horner) and living with their daughter Tami (Tami Monroe) and also with Randy, who is described as "Hank's sister's third husband's illegitimate son" and is played by Jon Dough. There is mention of Mary and Hank having a gay son named Jody, which is the name of the gay character that Billy Crystal played on Soap, but he's never seen.

An actress credited only as Brittany played Mary's sister, Porsha Cobbot, who is married to Jeffrey (Joey Silvera) and they are said to have a young son named Billy, who is also never seen in the film. Sean Michaels plays their butler, Wilson (in an obvious nod to Robert Guillaume's character, Benson, from SOAP). They also live with Porsha and Mary's dad, who is senile and dresses like a WWII General, and is played by Lincoln himself.

So this film is just basically a couple of days of life of the two families, which involves them having sex with various people. We learn that Hank has been suffering from impotence, and this leads Mary to seduce Randy, ostensibly to prove to him that he's not gay, as he was questioning himself. Jeffrey bangs one of his son's school teachers, played by Kelly Royce, and Porsha catches them. This leads her to seek comfort in the arms of Wilson.

Since Porsha has locked him out of her room, Jeffrey goes to spend the night at Mary and Hank's place. While there he gets approached by Tami and the two of them begin to have sex, with her getting naked and him eating her out, but then Mary interrupts them by knocking on the door. Jeffrey hides under the covers while Mary talks to Tami, and she confesses to her that Hank is not her real father, Jeffrey is!

Jeffrey jumps out of the covers and runs out of the room in shock. Tami is shocked too. But then Mary reveals that she is also not her mother. Tami says she still loves her, and Mary says she loves her too...and they have sex.

And then finally Mary catches Hank in bed with a blow-up sex doll, revealing that it's helped cure his importance. So they have sex and, presumably, live happily ever after. THE END.