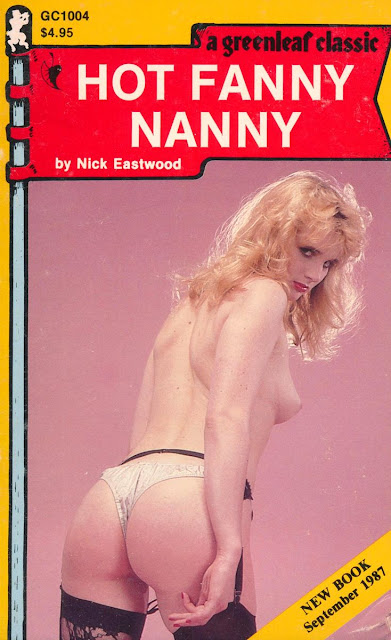 Just four months after the publication of his book And Nanny At Night, Greenleaf Classics released this book from Nick Eastwood, in which he basically recycled the same plot: A young woman (with an alliterative name) takes a summer job to pay for college, in which she acts as a live-in nanny to a very shy teenage boy who spends most of this days reading school books in his room. She then decides to seduce the boy and take his virginity, which she eventually succeeds at doing even though the boy resists her at first. I'll even spoil a bit of the ending by saying that once again eventually the nanny and the boy get caught by the boy's father, who then decides to fuck the nanny himself.

So yes, it's essentially the same story, but did he change enough details to make it unique? Read on and find out.

Our lead character in this book is Denise Daily. She's described as a "tall slender girl with waist-long blonde hair" with firm medium-sized tits. So, basically similar to the unnamed model who is pictured on the cover. And this story begins a week after she's graduated High School. She's alone at the beach at night with her boyfriend Dustin, whom she's been dating all Senior year. This is their last night together as they're going off to different jobs for the summer and then different colleges. Denise is a virgin but has decided that she's finally ready to have sex with Dustin, so after briefly skinny-dipping they go back to Dustin's car and have sex for the first time, which Denise loves, and then they do it again, before saying goodbye to each other.

Denise had been raised by her single mother and had a sheltered upbringing. But now she's eager to live her life on her own terms. She signed up with an agency that got her a live-in nanny job for the summer, which she needs to pay for college. The employer she's assigned to is Ken Evans, a single father in his 30's. He's surprised when she arrives on her first day because she's younger than he expected. She's surprised when she meets his son Marvin (described as "lanky, awkward, and [wearing] horn-rimmed glasses"), because he's older than she expected. But Ken insists that Marvin needs a nanny because "The kid can't be trusted alone while I'm at work. He breaks things, he forgets to eat, and he can hardly tie his own shoes. His whole life is books and studying."

Later that day, she hears a crash and sees that Marvin has somehow managed to fall out of his bedroom window, which is on the second floor, and landed in some bushes. Denise goes out to check on him, and he's not hurt, but he is dirty, so Denise insists that he needs a bath. She runs the bath and, despite his protests, strips him naked and proceeds to wash him herself with her bare hands.

The next day, after Ken leaves for work again, Marvin angrily tells her to not do anything like that to him again or else he'll tell his father. But Denise doesn't like his smug attitude and determines that she's going to prove that he likes girls and "make a man" out of him, no matter what it takes.

That afternoon she convinces him to bring his books out back to study by the pool, so he can get some sun. When he does this she sunbathes on a towel next to him in a skimpy bikini, while he tries to avoid staring at her. Then she takes her top off, exposing her bare titties, and asks him to come rub suntan lotion on her. Marvin does, avoiding her chest until she grabs his hands and forces him to rub it on her titties. When he tries to stop she manages to pull him down next to her and then strips him naked and starts rubbing suntan lotion all over him, eventually getting to his cock which is rock hard. As she does, she gets him to admit that it feels good, so she pulls off her bikini bottoms and takes his hand and has him play with her pussy while she continues to slowly jack him off and then bends down to start blowing him. The two of them get each other off, with Denise swallowing his cum after he orgasms. And then Denise puts her bikini back on and leaves Marvin laying there in a daze, as she goes inside to start cleaning.

That night, after Ken goes to sleep, Marvin visits Denise in her room and tells her that he liked what they did that afternoon and he couldn't wait to be with her again. So she strips him out of his pajamas, takes off her nightie and gets on the bed with him and shows him how to fuck her, which they do three times. Although they agree afterward that they shouldn't take risks like that when Ken's home again, and restrict their fucking to during the day when Ken's at work.

The book then jumps ahead a month to July, where we learn that since then Denise and Marvin have been fucking every day during the week. And this has made Marvin more self-confident. At Denise's suggestion, he's traded his nerdy glasses for contact lenses, gotten a better haircut, and started working out with weights. It's just as he's finishing his daily workout session that Denise brings him a sandwich, but he's not hungry and he just pulls her to him and kisses her, and they begin to have sex. After doing it once, where Denise teaches him to go down on her for the first time, they decide to go to Ken's bedroom to have sex on his bed.

They get into it and that's when Ken comes home. He'd gotten off from work early and decided to surprise Denise and Marvin by taking them to Disneyland. But he's the one surprised when he hears the sounds coming from his bedroom. He peaks in and sees them fucking. He gets turned on and actually takes his cock out and jacks off as he watches, eventually shooting his load against the wall. That's when he zips up and walks in, shocking Denise and Marvin.

Ken tells Marvin to go to his bedroom and stay there while he talks to Denise. But instead of firing Denise like she expects, he comes on to her and they start fucking, which Denise loves because he's the first grown man she's ever had sex with, and his cock is much bigger than either Marvin's or Dustin's.

Eventually Marvin comes back to the room and is angry to find his father fucking Denise, and when he confronts them Ken just says that the two of them can simply share Denise for the rest of the summer, which Denise readily agrees to. Marvin is hesitant at first but realizes that this is better than losing Denise altogether, plus he'll still have her to himself during the days while his father is at work, so the next thing you know he's naked again and fucking Denise while his father watches. Then Ken suggests they try fucking her at the same time, so they tag-team her, with Denise on her hands and knees as Ken fucks her pussy while Denise sucks Marvin's cock. Then after they cum the males switch places and fuck her again. When they finish, Denise remarks how much she loves this job and is looking forward to the rest of this summer.
THE END.

Nick Eastwood definitely succeeded in switching enough details to make this story not feel like just a retread of the first one. It still has the ridiculous premise of the lead being hired as a nanny to a teenage boy. Again it would make more sense if she was just called a maid or housekeeper, but I guess there's a certain fantasy about "nannies" that these books are trying to appeal to. I will say the fact that the story begins with the nanny having just graduated high school, makes the adult woman having sex with an underage boy aspect of this story seem a little less wrong. At most she's 18, so pretty close to whatever Marvin's age is supposed to be. So it's more just like two teenagers fucking. At one point Ken refers to them both as "kids" (if anything, Ken fucking Denise is creepier than Denise fucking Marvin).

Of the two, I'd probably say the first one is my favorite, but this one is pretty close, and therefore also highly recommended. Chacebook rating: FIVE STARS