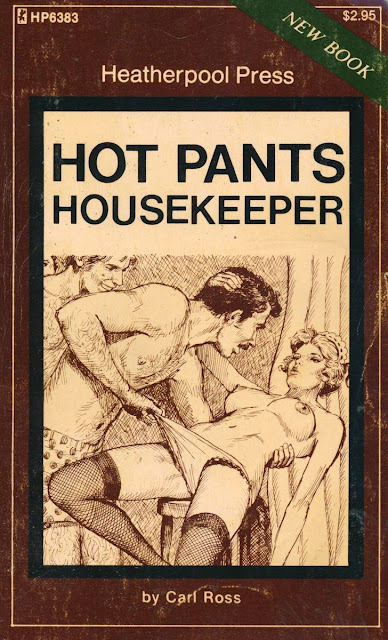 Here's a book so nice that Greenleaf Classics published it twice, under their Heatherpool Press imprint and under their Lusty Capers imprint, although neither has a date on their cover so I don't know which came first.

Written by Carl Ross, it's thematically similar to the various Nanny books by Nick Eastwood. I always noted that those books would make more sense if the young women who were the lead characters were maids or housekeepers, rather than nannies, since they're not hired to watch any young children, and this book does that.

Sonia Thomas is a 27-year-old woman, described as a stunningly beautiful blonde blue-eyed woman of Scandinavian/Norwegian descent with a voluptuous body and huge and firm breasts. We learn that she's recently divorced from a sexless and abusive marriage, and is now a bit of a nymphomaniac. She has been hired by a man named Ralph Merritt to be a temporary live-in maid.

Ralph Merritt's wife has gotten pneumonia is expected to be bed-ridden for a month or longer. Sonia is hired to be the housekeeper during that time. Also living in the house with them is Ralph's 3 sons, 23-year-old Eric, 19-year-old Denny, and Ronnie who is a Junior in High School (so, 16?).

Sonia is immediately attracted to Ralph, who at 41 years old is described as "in excellent condition. He didn't have a gray strand in his dark, wavy hair, and his biceps and shoulders were muscular and wide. His broad chest slimmed down to a flat, hard waist." And the feeling is mutual. Neither does much to disguise their lust for each as Ralph shows her around the house and to the bedroom she'll be staying in, which he says is his daughter's room but she's away at college so it's free for Sonia to use while she's there.

Late that night, after everyone else has gone to sleep, Ralph sneaks into Sonia's room, and finds her awake and waiting for him. They have a long hot sex session. Unbeknownst to them, Eric had gotten up in the middle of the night to get a glass of milk, and he heard the noises from Sonia's room and listened as his father fucked her. This made Eric determined to get with Sonia next.

So the next night Eric made a point of staying up late, outlasting everyone including his father. So this time when everyone is asleep, it's Eric who sneaks into Sonia's bedroom, and she's ready for them and invites him to fuck her as well. Ralph had set his alarm for 3am, getting up and hoping to spend the night with Sonia again, but is angered when he hears Eric in there already but knows that he can't do anything about it.

Eric fucks Sonia and they both love it. While Ralph was described as having a big long cock, Eric's is explicitly said to be 10 inches long, the biggest Sonia's ever had, and she even tells him he's bigger and fucks her better than his father. Eric pretends to be surprised to hear about Sonia and his father and uses that as a pretext to act angry and "punish" Sonia by fucking her in the ass, something she's never done before, but that he loves. It hurts her at first but she starts to like it, and they fuck each other silly.

Denny is unemployed and not in college or anything. He usually spends his days hanging out in a pool hall with friends. But he's attracted to Sonia too. So the next day he decides to stay home, and when his father and brothers have left for work and school, he comes on to Sonia and she readily accepts. It turns out that Denny is a fiend for oral sex, and so that's all the two of them do. Take turns going down on each other, with Denny even sticking his tongue in Sonia's ass, but never actually having sex.

After this Sonia is now determined to seduce the last male in the house, young Ronnie. But he's not as confident as his older brothers or his father, and he makes no move toward her at all. So Sonia knows she has to take the lead. She sneaks into his room naked late at night and finds him sleeping naked. She begins blowing him, which wakes him up. The boy is a virgin so this is extra exciting to him, and he can't control his loud moaning. Not wanting to risk waking anyone up, Sonia takes him to her bedroom (leading him by his hard cock, like it's a leash), which is downstairs and in the back of the house, away from the others, where they continue and she lets him fuck her. Despite being a virgin, he has a larger than average cock, like his father and brothers, and thoroughly satisfies Sonia.

And then the big surprise is that Ralph's 20-year-old daughter Marilyn comes home from college for a one-week vacation. This means that she and Sonia will have to share the bedroom. The men are all disappointed since they know this means that none of them will have a chance to bang Sonia while Marilyn is there. But when Marilyn arrives Sonia is surprised by how attractive she finds her, and it turns out that the feeling is mutual.

Marilyn is described as a brunette with a tanned complexion which stands in contrast to Sonia's blonde looks, but she also has a curvy body with nice big breasts. And we learn that while at college Marilyn has joined a sorority that turned out to be made up of "nearly all lesbians," and on her first night there she'd been seduced by a pretty blonde Senior student.

Sonia had ever been with another woman before, but when Marilyn comes on to her as she's unpacking, she immediately gives in and the two women take turns eating other out before everyone comes home. And then we hear that they spent every night fooling around together for the rest of Marilyn's vacation. And that Sonia was pleased with her sexual conquest of most of the Merritt family.
THE END

The story has some holes in it. Mrs. Merritt is a non-character, conspicuous in her absence from the plot, as we just read about Sonia occasionally bringing her meals in her bedroom. But Sonia is also described as dressing very sexy, including low-cut blouses that accentuate her big breasts, and short miniskirts, while she's working, which turns the men on, but I can't help but wonder what Mrs. Merritt thought about having a young woman dressed like that in her house?

Ralph and Eric both know about each other banging Sonia, but they never appear to confront each other over it, while Denny and Ronnie remain clueless. At least with Denny it can be explained that he only gets with Sonia during the day while the others are out, but how do Ralph, Eric, and Ronnie avoid running into each other when they try to get with Sonia late at night?

But the sex scenes are hot and long (at least 2 chapters each). Carl Ross writes it so that all the characters engage in constant dirty talk while fucking, so if that's something you're into you'll especially like this book.
Chacebook rating: FOUR STARS 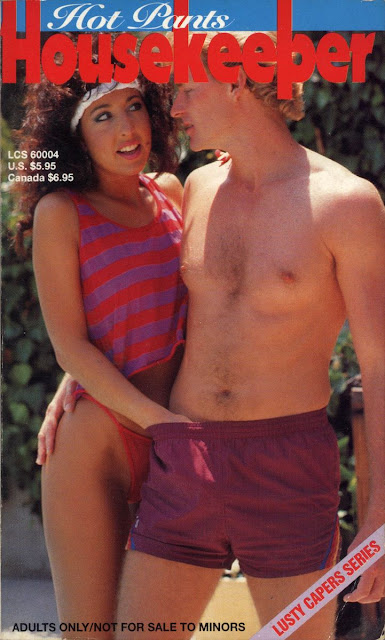