NANNY MADE THEM DO IT by Nick Eastwood 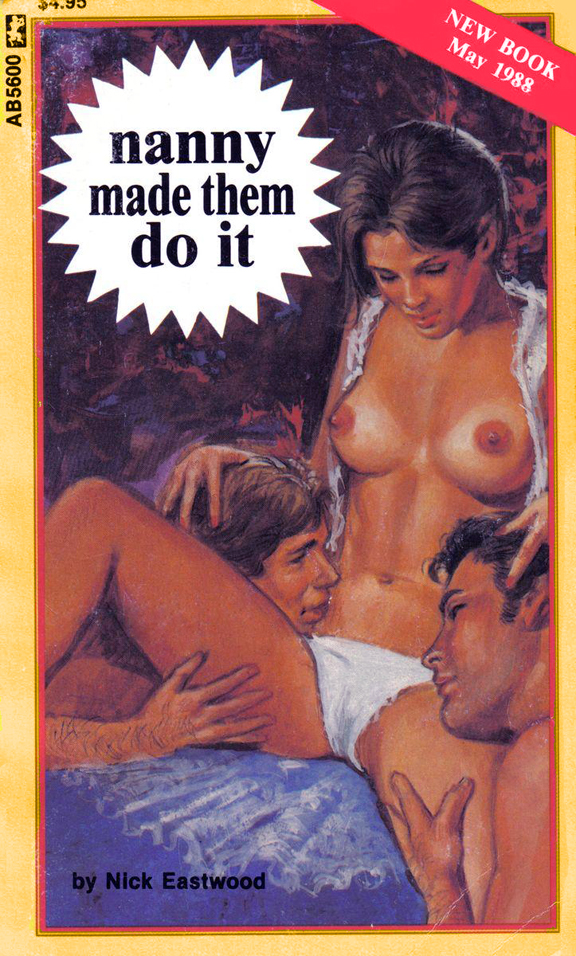 In May 1988, five months after Nanny Needs It, Greenleaf Classics published Nick Eastwood's fourth (and last?) nanny-themed book. This returns to the basic plot of his first two books on the topic, And Nanny At Night and Hot Fanny Nanny, although like the previous novel it has the nanny watching two teenage boys instead of just one.

Her boss is Jim Crocker, a successful man who's a widower, we later learn that his wife died in a car accident that they were both in 2 years prior. He's hired Heather to watch his two sons, Darren and Andy, who are both teenage high school students. We don't get their ages, just that Heather is only "a few years" older than them, and that Darren is the older brother. So I could guess, maybe, 17 and 16?

But despite their ages, both boys are very sheltered virgins, as Jim is very strict with them, not allowing them to date and never even talking to them about girls or sex. Heather thinks he's a prude, but since he's the boss she's been following his rules. But it's obvious to her that the boys are interested in girls, as the story begins with Heather sunbathing by the pool in a bikini and she sees that the boys are trying to secretly watch her through the window. This turns her on and she decides to tease them by taking her top off and fondling her tits, even holding them up and licking her own nipples. Then she stands up, takes her bottoms off too and jumps into the pool to swim naked for a little bit. The boys manage to hide when she comes back into the house, but we see them talking about her and complaining about their lack of sexual experience.

Later that day while cleaning Darren's bedroom she finds a bunch of porn mags hidden under his mattress. She knows Jim would not approve if he found out about this, so she calls Darren into the room to confront him. He begs her not to tell his father, which she agrees not to do but says she needs to throw the mags away. Darren said he just wanted to know more about the difference between men and women, so Heather gets the idea to show him herself. She lifts her shirt and takes her bra off, then takes off Darren's shirt, so he can see the difference between their chests. Then she goes further, getting totally naked and telling him to do the same, then laying down on the bed and letting him look between her legs. Darren gets very excited and is rock hard, so she then has him sit next to her and she grabs his cock and starts jacking him off while taking his hand and having him play with her pussy, until they both cum. Right at that moment, they're both interrupted by the sound of Andy calling for them, asking them what's for lunch, so they have to stop.

No, it doesn't make sense that he wouldn't have taken them both at the same time, but whatever.

Heather had sworn both boys to secrecy, with promises of getting together with them again except it turns out to be hard to get some time alone with either of them again as they're both home during the day and then Jim is home at night. Finally Heather gets the idea to suggest to Jim that he should take turns taking each boy to work with him to spend the day together, and he thinks that's a good idea. So the plan is that on Mondays he'll take Andy to work, and on Wednesdays he'll take Darren to work. Still not aware that Heather has fucked both of them, each boy is excited as this will mean there's one day a week where he will get to be alone with her.

Sunday morning Darren sneaks into bed with Heather while she and everyone else is still sleeping. He's naked and she's in just a nightie, which he lifts up and starts fucking her in the spooning position, which she enjoys as she wakes up, but cautions him to be quiet.

But they're not quiet enough, as Andy wakes up to use the bathroom and as he walks past Heather's room he hears their moans, so he peaks through the keyhole and watches with anger, jealousy, and lust as Darren fucks Heather.

At this point, if you've read Nick Eastwood's previous nanny-themed novels, or at least my reviews of them, you know where this is heading. Andy eventually enters the room to confront them both and Heather convinces them to agree to share her, so they take turns fucking her and then end up tag-teaming her, with her on all-fours as one fucks her pussy while she blows the other one (and then they switch places).

But the three young people get so excited they forget to control their voices. Jim wakes up and hears them and watches through the keyhole, getting excited despite himself. He bursts in and kicks the boys outside, ordering them to clean the garage. Then when he's alone in the room with Heather she gets naked and comes on to him, and Jim ends up fucking her too. When they're finished he agrees to not punish the boys and give them all permission to keep fucking, having finally realized that he's been too strict with them. He also makes a deal with Heather that he wants to keep fucking her too, saying they can do it at night while the boys are asleep from now, as he's also tired of living without sex, although he still want to keep that secret from his sons, which Heather happily agrees to do. THE END

This story is a bit repetitive in some of the sex scenes, the way each both seems to react exactly the same when Heather seduces them is a bit unrealistic, but then if were looking for "realism" we wouldn't be reading books like this, would we? The sex is hot, which is what ultimately matters most. Re-reading these books reminds me why Nick Eastwood was one of my favorite writers of this genre back in the day. Chacebook rating: FIVE STARS