NANNY NEEDS IT by Nick Eastwood 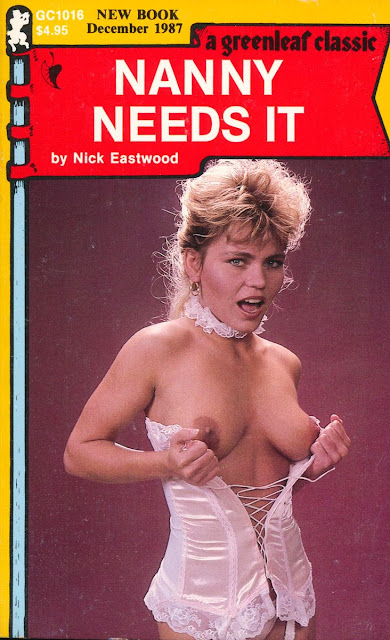 First, the lead in this story is Carla Smith, and unlike the short and petite builds of Linda Lane and Denise Daily is described as a tall brunette with "large thrusting tits" (also described as "big heavy melons"). As usual we don't get her exact age, but we do know that she's completely her freshman year of college and it's now summer break. So I'd guess she's 19? We learn that she was a virgin when she began college, but early on she met and started dating a Junior named Ted, whom she let take her virginity pretty quickly and the two spent the rest of the 9 month school year having sex every chance they got, including one time where they had sex in public in a secluded area of the campus at night, which we read about in a flashback. But now Carla won't get to see Ted again until after she goes back to school and is dreading going the whole summer without sex, as she's gotten used to it.

The reason she won't be getting sex is because she's been hired by Biff and Dot Randle, a wealthy married couple in their 30's, who are taking a cruise to Hawaii on their private yacht for the summer, with their two teenage sons Lance and Rusty. Carla has been hired to travel with them as their nanny. Lance is the popular athletic student while Rusty is the nerdy studious one. But we do learn later that both are virgins (Lancy has gone out with many girls, some who let him play with their tits before, but none would have sex, while Rusty has never been on a date or even kissed a girl). We don't get their exact ages either, except at one point Lance complains to Carla about her calling him a "kid," saying that he's almost as old as she is, and she apologizes and acknowledges that he'll be going to college too "in a few years." So I'd guess he's 15? And Rusty is said to be one year younger than Lance, so 14?

The trip is from San Francisco to Hawaii, and Dot says they're in no rush so are taking the long route (I looked it up and see that a boat trip from that distance could take up to 25 days), so being stuck on a yacht with the family means that Carla won't have any opportunities to find men to have sex with (or so she thinks). The first day she's on the yacht Carla catches Biff and Dot having sex in their cabin, and secretly watches from the hall. Dot is "a pleasant, shapely blonde woman" with big tits (but not as big as Carla's) and Biff is "a tall powerfully-built man with sun-bleached hair and coppery beard." The two of them have hot sex, which really turns Carla on to watch, especially as she sees Biff's nine-inch cock ("as thick as her wrist") and spies him going down on Dot, which he's apparently expert at doing as he brings her to ecstasy.

Watching them just makes Carla even more anxious at the thought of going without sex all summer. The next night the Randles have a going away party on their yacht, for a lot of their wealthy friends, and Carla helps serve drinks and food. Carla was hoping she might find a nice single man she could hook up with, but it's all married couples. At one point during the night, Carla is walking past a cabin when she hears some voices and when she peeks in she sees a man and a woman, identified as Marty and Britt, inside. She recognizes that they each came with other people who are their spouses, so they're both cheating. Carla secretly watches from the hall as they have hot sex.

When they finish she ducks into the next cabin to hide as they leave, but then before she can leave the cabin she hears someone else coming into it, so she ducks into the closet. And from there she's shocked to see that it's Biff and a married woman named Lisa. Based on what she's seen before she'd never would have guessed that Biff would cheat on Dot, but she watches as they have sex, including Biff going down on Lisa which is something Lisa says that her older husband George is "too old-fashioned" to do.

They don't know that Rusty noticed them acting funny during lunch and got suspicious, so he sneaks down to Carla's cabin and watches from the hall as the two of them fuck. When they finish, Rusty barges in and confronts them, threatening to tell their parents if he doesn't get a turn with Carla too. Lance is pissed but knows he has no choice but to agree so he prepares to leave, but Carla insists he stay. So he sits in a chair and watches as Rusty strips and gets into bed with Carla.

Unbeknownst to all three teenagers, Biff and Dot go to see where everyone is and find them in the cabin. It's at this point that we learn that Biff and Dot are in an open marriage and are pretty kinky overall. So neither is mad at Carla fucking their sons and in fact think that this is good for the boys and they are glad that Carla is there to teach them about sex. So they mutually agree to pretend that they don't know what's going on and just let it continue. But they're also turned on want to watch. So they keep quiet and then start fucking (with Biff behind Dot) as they watch their sons fuck Carla. After the three teens cum, the boys switch places, so Lance can fuck Carla while she blows Rusty.

After they finished, Biff and Dot sneak away as Lance and Rusty leave Carla in her cabin. Still being turned on, Biff and Dot decide that they want to get involved with Carla too. So Biff takes the boys up to the deck to teach them how to sail the yacht, while Dot goes back down to Carla's cabin and just walks in, catching Carla laying on the bed naked, and immediately start coming on to her. Carla is shocked at first when Dot just leans in and kisses her, sticking her tongue in her mouth, but decided to just go along with it. Dot gets naked and shows Carla how to 69. After Biff has finished his lesson he leaves the boys to guide the ship while he joins Biff and Dot in the cabin, and they have a threesome where Carla both gets to sample Biff's huge cock and get his talented tongue in her pussy.

When they finish they tell her that they know about her and their sons but are okay with her continuing to fuck them during the trip as long as she also agrees to keep having sex with Biff and Dot too, although they want to keep that secret from the boys. Carla happily agrees.

Meanwhile up on deck Lance and Rusty talk about how lucky they are to have Carla now and that they need to make sure to be careful so their parents don't find out, because they're sure they wouldn't understand because they're old people who probably  who've "probably forgotten what sex is all about!" And they laugh. THE END

It's a good story, certainly different enough from the first two books. I do feel like more time could have been spent with Carla seducing the boys, that could have been dragged out longer with more encounters between them, rather than giving those scenes of Biff and Dot with the other people (we could have just gotten that reveal about their open marriage later without actually seeing the evidence), the scenes are all hot with Nick Eastwood's vivid writing.