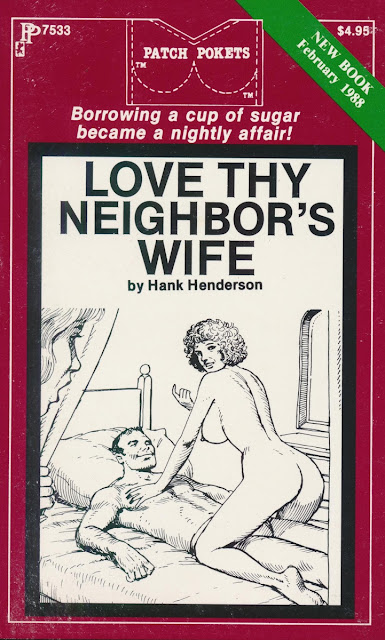 This book features three married couples but the main character for the majority of the book is Stacey Parker, a 26-year-old housewife, married for four years to Fred Parker. Stacy is highly sexual and for the first 3 years of her marriage Fred willingly satisfied her. But that changed when he got a promotion at work and is now busy a lot, and has less of a sex drive. In the past 6 months they've barely had sex, and now Stacey has been driven to her boiling point.

This was the first time Stacey ever cheated on her husband, but she loves it so much that she knows this won't be the last time.

In chapter four, the action switches to a new character, as Jack's wife Karen comes by his house that night, wanting to reconcile. It turns out that since she left Jack, Karen has had sex with "a couple of strangers" and now realizes what she's been missing, in terms of enjoying her sexuality. She wants to get back with Jack, willing to have sex with him as often as he wants now, but she wants an open marriage, so she can still have sex with other men, as well. She doesn't mention this at first when shows up, she just comes on to him and they have hot sex, which is so good for Jack that when it's over he's already thinking about the next time they can do it...while Karen is thinking about "all the other men in the neighborhood she wanted to screw."

Chapter five is the next day. Stacey is home, still bored and horny. She went to see Jack but he wasn't home. So she decided to bake a cake for Fred, hoping that would help get him in the mood when he got home that night. But as she was getting the recipe ready, she realized that she was out of flour. Not wanting to go all the way to the grocery store just for that, she goes across the street to ask her neighbors if they have any she could borrow. Larry and Sue Michaels are the couple who live across the street. Larry is doing yard work, with his shirt off, in the front yard when Stacey approaches him. He tells her that Sue is out shopping, and should be gone all day, and invites her inside so he can see where Sue keeps the flour.

In chapter six we learn that Larry's wife Sue had come home early, and actually saw Larry fucking Stacey, but they were so busy and loud that they didn't hear her come in. She silently watched, then snuck out back into the garage until Stacey left. When she comes back inside she finds Larry still laying naked on the kitchen floor, where Stacey left him. Larry is shocked, realizing he'd been caught, but before he can speak Sue strips naked and angrily demands that Larry fuck her as good as he fucked "that slut from across the street." She gets down and starts sucking Larry's cock, even though he initially insists that he can't possibly get hard again right then after the two loads he spent with Stacey, but Sue won't stop. And to his surprise, she manages to get him hard again, and she bends over and orders him to fuck her exactly like he fucked Stacey, which he does.

Chapter 7 is "a few days" later. After hearing Larry's story, Sue wanted to have sex with Stacey herself, noting that "it had been a long time since she'd made love to another woman." Noticing Fred leaving the house with some luggage one morning she assumes she's going away on a trip, so she goes over to their house, wearing short shorts and a tight t-shirt, and asks Stacey if she can borrow some flour.

Stacey, who greeted Sue at the door wearing nothing but one of Fred's oversized button-down shirts is taken aback by Sue's appearance but invites her in, and when Sue reveals that she knows about her and Larry and then propositions her, she doesn't resist. The ladies take turns sucking each others tits and then going down on each other.

Unbeknownst to them, Fred returns early, his flight having been canceled. And when he hears the sounds from the bedroom he sneaks upstairs and is shocked to find Jack fucking Stacey. But they don't hear or see him and so he just sneaks back out, and decides to "seek revenge."

In chapter 9, Fred goes next door to see Karen, thinking the two of them can figure out a way to get back at their cheating spouses. He's of course shocked when he finds out that Karen already knows and approves of what her husband is doing. She then mocks Fred for not satisfying his wife, tells him he needs to let go of his inhibitions and then throws herself at him, pinning him up against the wall and kissing him.

Fred's never cheated before, but finds himself unable to resist when she gets on her knees and blows up. Then she has him fuck her twice, once in the pussy and then in the ass.

In the 10th and final chapter, Fred went home (the book doesn't mention if he and Jack passed each other as they left) and he and Stacey confess everything, with Fred promising not to neglect her anymore. Karen then calls to invite them both to dinner, and Stacey accepts and suggests they invite Larry and Sue as well.