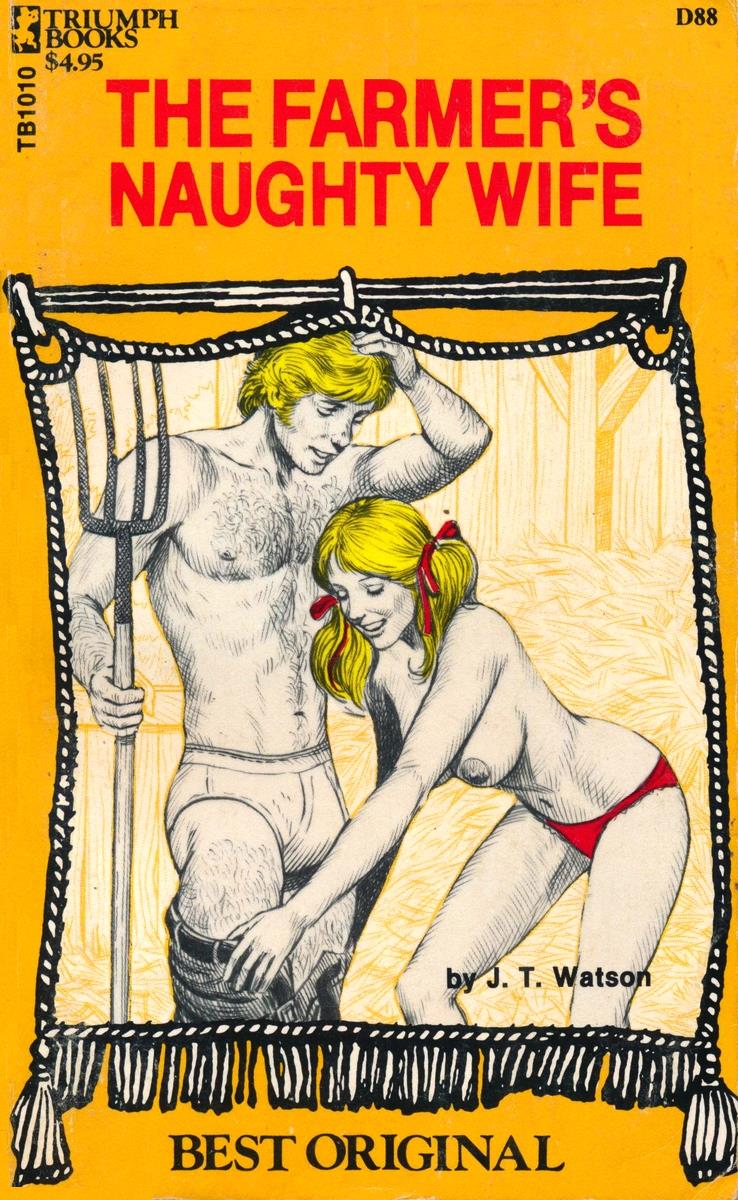 Originally published in 1970, this book by J.T. Watson focuses on our lead character Judy Bowers. She's 22 years old, auburn-haired with "firm proud tits and a slender waist." She's married to Bill Bowers, no age is given for him, we just know that they've been married for six months and live on a farm together on the outskirts of a small town (it's not clear where exactly). Judy is already very unsatisfied, being a farmer is not something she expected to be and she's bored with it. She was a virgin before she got with Bill and since they've been married he's usually too tired for sex. They do have sex once early on in this book and it's good, Bill is described as "chunky" but still handsome and muscular with a good sense of humor and a decent-sized cock, it's just not frequent enough for Judy.

Also in this story is Trish Canfield, a local girl from town whom Bill hired to work in the house, mostly in the kitchen as Judy doesn't like to cook. When first introduced Judy says she lives with her and Bill, but later in the book it says Judy lives with her family in the woods and just comes to the Bowers' house in the afternoon to work and only sometimes stays overnight. Trish is 19 and described as a "blonde-haired, green-eyed, bosomy girl." Repeated references are made to her extremely large breasts, which attract the attention of everyone who sees her, including Bill and Judy, who tolerates Trish's presence in her home but also looks down on her as just some uneducated hillbilly.

So that's the background of the main protagonist, and the novel begins with Judy down at the local bus station awaiting the arrival of her cousin Randy, who is 23 years old and whom she grew up with and was always close to as they were growing up. Randy is a marine who'd just finished two tours in Vietnam and was now coming to visit her and Bill for two weeks. Although it's said that as kids they'd occasionally joked around about sex, nothing had ever happened between them before. But now seeing each other again as adults, things have changed.

Judy is immediately attracted to her tall blonde handsome cousin when she sees him get off the bus in his uniform, and Randy makes it clear that the feeling is mutual, with heavy innuendo. When they get back to her house, and she shows him his bedroom, he aggressively comes on to her, telling her he wants to fuck her right then, and after some light resistance Judy is ready to give in, but they get interrupted by Trish, who tells them dinner is ready.

It's that night in bed that Judy aggressively initiates sex with Bill, because of how turned on she got by Randy, and she feels guilty when right as she orgasms she pictures Randy's face instead of Bill's.

The next day Randy's pursuit of Judy begins in earnest. While Bill is out in the barn, Randy approaches Judy in the kitchen. She actually tries to hold him off with a knife, but he simply disarms and overpowers her, holds her down on the table, and fingers her pussy to orgasm. She then expects him to fuck her but he tells her he'd rather she come to him when she wants it and leaves. Later that day, Judy listens from another room and masturbates as Randy fucks Judy, which inflames her lust and jealousy.

Randy arranges for him and Judy to meet at Trish's house in the woods, while Trish's family is away. Judy agrees and they go inside and have sex in Trish's bedroom. Judy sucks Randy's cock (something she'd never done with Bill) and then Randy fucks her twice. And then Judy blows him again, swallowing it this time. Afterward, she wants to do it again, but Trish's parents come home early, and so she and Randy have to jump out the window to sneak out.

Things take a darker turn in the next chapter. It's been a couple of days and Randy has been avoiding Judy for some reason. She finally corners him begging for sex, and he tells her to meet him at Trish's house again that afternoon. But when she gets there, instead of Randy she finds Trish's big muscular older brothers Jake and Ralph. They reveal that they know about her and Randy and that Randy has given her to them for the day. She fights them off, by kicking Ralph in the balls and running away, but she bumps into Randy who grabs her and takes her back to the brothers and leaves her with them. The men then forcibly undress and rape her, Ralph fucking her in the pussy while Jake forces her to suck his cock. And to Judy's surprise, and shame, she enjoys it and orgasms.

When they let her go she rushes back home and takes a shower, and then is met by Trish, who says she knows what happened, and reveals that her brothers first raped her when she was 14, and that she's been regularly fucking them ever since. She comes on to Judy and the two of them end up having hot lesbian sex. It's this experience that finally makes Judy realize that she's "a hot box" who "needed constant sex to fill her."

In the next chapter it's a few days later, we're told that Judy, Trish, and Randy have been having as much sex as possible behind Bill's back. But this starts to make Judy feel too guilty because she does love Bill and he's a good man. But she knows she can't go back to the way things were and wants to keep having lots of sex, so she tells Trish she's going to do the right thing and divorce Bill. But Trish convinces her that if she still loves him she doesn't have to divorce him, she just has to get him to join them. So that night Judy takes Randy into town, leaving Bill alone with Trish, who then goes out of her way to seduce him, and it works. Judy and Randy come back home and "catch them" just as they finish fucking.

The book skips over exactly what happens next, but the plan works. As we're told that the next few days are a whirlwind of "fucking, sucking, eating, and drinking" between the four of them. But then it's time for Randy to leave (a little earlier than originally planned, but he wants to go see his parents before returning to the Marines). Bill, knowing he'll have plenty of time with the ladies after this, goes to town for the night so that Randy can spend his last night with Judy and Trish by himself. They have another hot threesome where they roleplay as master and slaves. Randy has the two ladies wash him in the bathtub, and then they get on a bed together, and the two ladies give him a double-bj. Then after he cums in Judy's mouth he has her sit on his face so he can eat her out while Trish sits on his cock and fucks him. Then they switch positions so that Judy is laying on her side while Randy fucks her from the back and Trish faces her and makes out with her. It ends with Trish lying down and Judy bending over her face so that Trish can eat her out while Randy fucks her ass.

The next day Judy drives Randy to the bus station. He says he doesn't know when he'll be able to visit again, but suggests bringing some of his Marine friends next time, which turns Judy on at the prospect of fucking them. She helps him load his luggage on the bus and they see he's the only passenger (same as when he arrived in town), so since there's some time before it leaves, they start to have sex on the bus. Just as they finish, an old married couple walks in and catches them, the wife looks disgusted, but Judy can see that the husband is turned on. Judy and Randy just laugh and she leaves.

As Judy is driving home, she's looking forward to Randy's next visit, but then realizes that in the meantime she's got Bill, Trish, Ralph and Jake to have sex with, so she starts driving faster. THE END

This is a decent novel. The sex scenes are all well-written and easy to visualize in my head, which is the key to these kinds of books. Plot-wise, I could have done without the inclusion of Trish's brothers, we didn't the rape of Judy or the admission that they'd raped Trish. I would have replaced that scene with another one of Judy and Randy together, or possibly another one of Randy and Trish. Or even a foursome scene with Randy, Judy, Trish, and Bill.

Still, even with that complaint, I find The Farmer's Naughty Wife an enjoyable novel that sure to arouse you. Chacebook rating: FOUR STARS