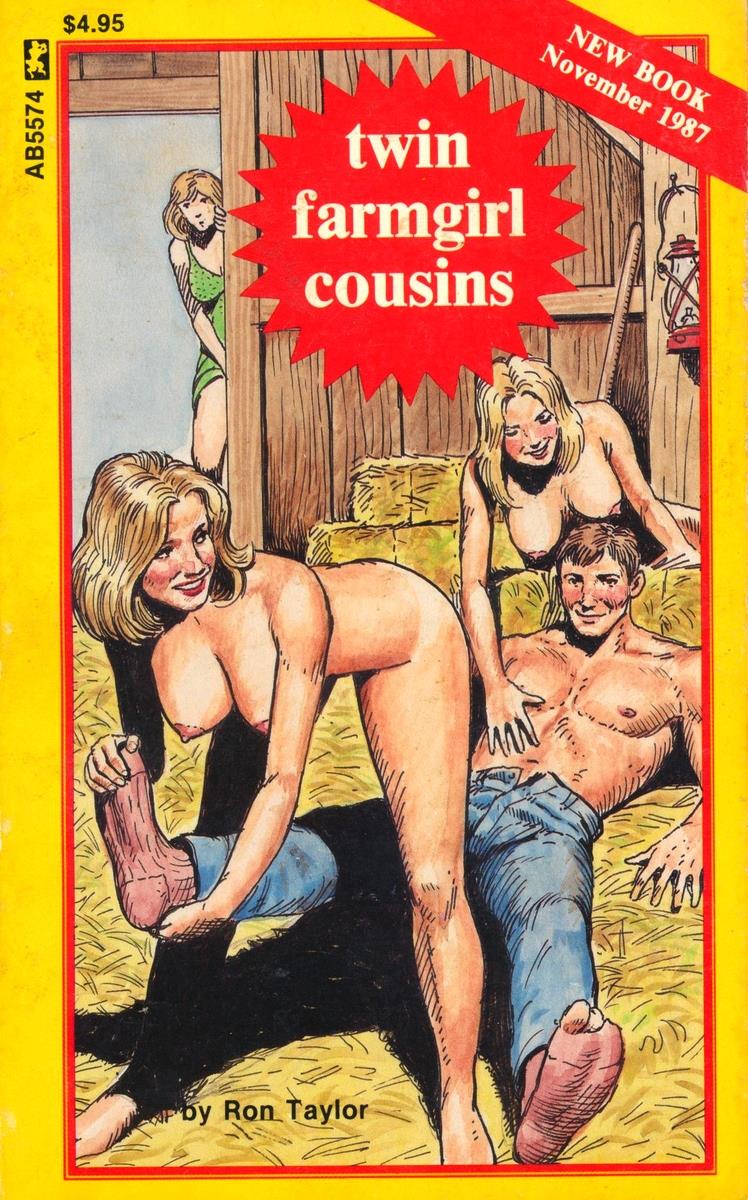 To be clear, this book relies very heavily on descriptions of incest, and not just between cousins, so if that topic (or the topic of underage sex in general) offends you, just skip this.

Our lead character is Nick Owens, a young man from Cleveland who has taken a bus to a small southern town called Rocksburg to spend the summer with his aunt Jenny Kendall, his uncle Bob Kendall, and their twin daughters, his cousins, Betsy and Becky Kendall, who live on and run a farm.

Nick is described as 18 years old, 6 feet tall, and handsome. He lives with his father Barney, there's no mention of what happened to Nick's mother, but Barney is in the middle of a nasty divorce from his third wife, which is why Nick has been sent to stay with relatives for now. The book doesn't say how old Betsy and Becky are, other than being teenagers, but it's stated that even though they can drive (the two of them pick up Nick from the bus station and drive him to their home) they don't have licenses because they're too young to get one. It's also noted that when they were all younger they used to play together, so they're not too far apart from Nick, so my headcanon is that they're 15.

The girls are described as "almost identical blondes, petite, but with ripe round tits." They're also said to have nice long legs and tanned skin. Nick thinks that their faces look so alike that he can't judge who's cuter but he does notice that Becky's tits are slightly bigger, while Betsy's ass is a little rounder.

Jenny is Nick's biological aunt, she's his father's sister, she's 2 years older than Barney but no exact age is given. She's also blonde, 5'8", with "full firm tits, round ass, and long legs." Specifically at one point Nick notes that while Becky got the tits and Betsy got the ass, his aunt Jenny "got it all."

We don't get an age of uncle Bob either, nor many specific descriptions of him other than the fact that he's a really big guy overall, he's tall enough that when Nick stands in front of him he still feels like a little kid, and it's even said that Bob's hand "dwarfs" Nick's when they shake hands. We also later learn that he has a "massive" cock, although no measurements are given for that. Bob is a deputy Sheriff, which just adds to his intimidating aura. Every time Nicks meets him in this book Bob is in his uniform with his big gun in his holster.

While Bob patrols mostly from the late afternoon to night shift, it's Jenny and the girls who run the farm, which has long been in Jenny and Barney's family.

Now while Nick begins this book as an inexperienced virgin, due to his being a "klutz" around girls, his cousins are quite the opposite. The book isn't clear on exactly how experienced they are, they tell Nick their father doesn't let them go out with boys, and that because he's the Deputy Sheriff all of them are afraid of him, and Bob apparently believes in their innocence. However, Jenny is aware that her daughters are "far from virgins" and also notes that they've had sex with "quite a few neighborhood boys." And the sex acts they readily engage in in this book have them performing like professional porn stars with few boundaries.

It's not long after the girls pick Nick up from the bus that they're propositioning him, to his shock and surprise. And they pull over to a side road and get out into a secluded area in a cornfield, where the girls practically attack him, they spend two hours having hot sex.

When they get home he sees Aunt Jenny who serves dinner and then he goes to sleep in the bedroom they've set up for him. Nick wakes up the next morning with Becky sucking his cock. When he's nice and hard she turns around on top of him for 69. But then they get interrupted by Uncle Bob, who comes in to meet Nick. Becky jumps out the window until Bob leaves, then she comes back and entices Nick to fuck her up against the wall before they have to get ready for their morning chores.

Later that afternoon we get another family twist. After finishing their chores the girls sneak off to a secluded lake on their property, where we learn they like to go skinny dipping and have lesbian sex with each other. That itself isn't a big surprise, as we already read about the girls doing sexual stuff with each other, including kissing and licking each other's tits, during their first threesome with Nick, but the twist is that Bob is aware of this. He parks in his patrol car, as he's supposed to be leaving for work, about a half mile away behind some trees, where he can sit and watch the girls with his binoculars. He's unaware that the girls know he does that, but knowing that their father is watching turns them both on, and makes them even hornier and they speculate about him jacking off while they have sex.

The next morning we read about how the previous night after everyone went to bed, the girls took turns sneaking into Nick's bedroom. First Becky snuck in for another 69 and then sex, and then after they finished and she left Betsy snuck in with a jar of vaseline for more anal sex. When Nick gets up Bob and the girls are out in town, and Nick finds Jenny in the barn milking a cow. She has Nick join her and she teaches him how to milk the cows and when they finish she reveals that she knows about him having sex with her daughters because she could hear him in the bedroom. But she's not mad or surprised, as she says this sort of thing is natural when you grow up on a farm, as you see animals having sex all the time and it makes you want to try it out. She tells Nick that she lost her virginity to his father when they were kids, and she comes on to Nick and they have sex in the barn.

Nick runs out to the barn where he finds Jenny and tells her what happened. Jenny takes him back to the house and when she hears the moaning sounds coming from the bedroom window, she peaks in and sees Bob and the twins having sex.

Jenny is angry about this, and decides she might as well fuck Nick again, which they do on the front porch, while Bob fucks Betsy and Becky upstairs.

At one point, while Nick is fucking Jenny in the ass, Barney shows up as a surprise, with some good news. But he's the one surprised to find his sister and son fucking on the porch. But of course, at Jenny's urging, he soon joins in, and fucks her in the pussy while Nick keeps fucking her ass.

Okay, in terms of story, there are some flaws, the biggest being the appearance of Barney at the end. It's not clear how far the farm is from Cleveland, but it doesn't sound like a spontaneous trip you'd just take without letting people know you're coming. Also when Nick joins the girls at the lake, that seems like something the girls wouldn't want to risk since they know their father often watches them there. Also in the end, Becky asks her father to fuck her in the ass. But this is after it had been repeatedly established that she was too scared to try it, but if she wouldn't even try it with Nick, it seems unlikely she'd want to try it with her father's "massive" cock first.

But that's nitpicking. It's a hot book. If you like the subject matter, you're going to love this! Chacebook rating: FIVE STARS