KNOCKING UP MY AUNT by J.N. Boyd 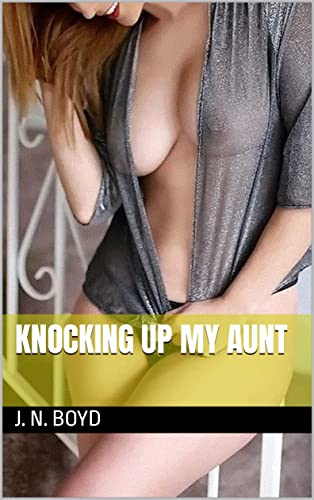 Okay, let's be clear from the start, this is NOT a story about incest.

I mean, obviously, the author is attempting to tap into that fetish with the title, but the "aunt" and "nephew" in this story are not actually biologically related. This would more accurately be titled "Knocking Up My Mom's Best Friend."

Our two lead characters are Dylan and his mother's life-long best friend whom he calls Aunt Cindy. We don't get the ages for either of them, but Dylan still lives with his mother and stepfather and is in "school", which could refer to either High School or college. Of course, the disclaimer for the story notes that "all characters are over the age of 18" so let's guess that he's 18-21, and Cindy is 16 years older than he is (the story mentions that Dylan's mother got pregnant and had him when she was 16), so she's 34-37. The story opens with the two of them having a conversation at Cindy's house on a Friday afternoon.

Cindy tells Dylan that having watched his mother go through teenage pregnancy and motherhood initially convinced her that she never wanted to have children herself, but she's just recently changed her mind about that and realized that she's not getting any younger, and she's not married or in a relationship, and doesn't want some random sperm donor whose background she doesn't know, so she's asking Dylan to get her pregnant because he's a great young man with good genes.

It only takes Dylan a couple of minutes to think about it and he agrees to do it, thinking the next step is for them to arrange for them to go to a clinic where he'll donate his sperm to her and she'll get in-vitro fertilization. But Cindy says that's too risky, as she doesn't want anyone, especially his mother, to know they're doing this and that Dylan is the father of her baby, so that means he'll have to knock her up the natural way.

And with that, they head to Cindy's bedroom where she strips naked and lays down on her bed with her legs spread, beckoning Dylan to strip and come get on top of her. Dylan fucks her in the missionary position until they both orgasm, and she has him lay there with his cock still inside her for a little bit, to make sure all the cums gets in her. Then Dylan has to leave to get home before his mother wonders what's taking some long. But he says this mother and stepfather are leaving that night to go out of town for the weekend, so Cindy will come over after they're gone so they can spend the whole weekend fucking.

And that's what they do.

The rest of the story describes them having sex two more times, first when she arrives at Dylan's house that night, they fuck with her on top this time. Then they go to sleep and the next morning where they have sex on their sides in the spooning position. It ends with them planning to spend the rest of the day in bed so Dylan can "hump a baby into" Cindy. THE END

It's just a 12-page short story, so there's not a lot of fleshing out of the characters or anything, this is a story for sex, and that's what you get. And the way the three sex scenes are written is pretty good, it's hot stuff. For visualization purposes, I would have liked a bit more description of Cindy, we just get that, from Dylan's perspective she's really beautiful. Despite being like an aunt to him, he's fantasized and masturbated to the idea of fucking her many times. She's got dark brown eyes and a curvy body with big breasts that have dark pink areolas, and creamy skin.

Still, for a short story of its type, author J.N. Boyd gets the job done. Chacebook rating: FOUR STARS